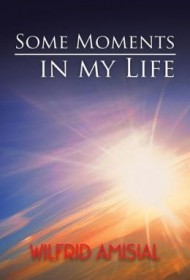 Some Moments in My Life by Wilfrid Amisial is a book meant to be inspirational from the perspective of a Christian immigrant from Haiti. (According to his biography on the back of the book, Amisial is “the first to be President of the Engineering Student Council at Howard University, first of Haitian descent to be an alumnus of M.I.T. electrical engineering department.”)

These poems are written in simple English and reveal a joyful attitude toward family life, as in the poem “The birth of my nephews,” which begins, “What a pleasant surprise it is to have you. / When the days were gloomy and sad, you came true. / Smiles, boy, do I treasure your smiles. / No matter the climate, you are pals.” Even though there are no striking images here, the slant rhyme of “smiles” and “pals” and the unity of “gloomy [days]” and “climate” are pleasing.

Some of his poems offer a more vivid window into his American experience, such as “Pasta Roni,” which begins unassumingly, “Pasta Roni is easy to cook” and ends nine lines later with a striking conclusion, “Humans created Pasta Roni for battered wives and me.” That is the first and last reference in the poem to violence, and it hints that Amisial has seen more than just the inside of college classrooms and church halls.

The less winning poems are the strictly religious pieces. They are earnest but offer nothing fresh, as in the poem “Halleluiah,” which addresses the speaker’s god in a very typical manner: “Fill our heart with your grace, Lord. / Our soul proclaims the greatness of the Lord. / Our God looks with favor on this lowly servant.”

Amisial’s achievements are laudable and his poems reveal a personality that appreciates hard work, opportunities, family, and friendships. While the poetry offered here is uneven in quality, this book may appeal to other immigrants and churchgoers looking for kindred spirits.