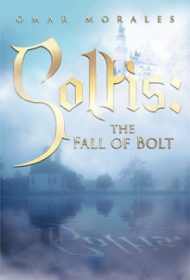 Omar Morales summons his own version of the hero’s journey in Soltis: The Fall of Bolt, a tale that fuses cues from Homeric epics with characters and plot elements from the fantasy genre.

As the story gets underway, Roy, the young human slave of a reptilian master named Murray, visits an ancient temple with his fellow slave, Rena. There, they experience a prophetic vision of destruction and danger and the arrival of the book’s big baddie, a madman named Mandigar who is set on upending the world order.

After the destruction of their native village, Roy and Rena find themselves with the urgent need to defeat the plots of Mandigar and the draconians, a race once thought extinct that now poses an existential threat. The conflict builds to an epic battle that summons comparisons to the tourneys featured in the Roman Colosseum. Roy and Rena meet elves, orcs, assassins and warriors as they struggle to stop the magic machinations of a madman.

Morales infuses the basic tale of an unlikely hero tasked with a monumental quest with colorful characters and imaginative settings. The story’s structure and characters will likely appeal to devoted fantasy fans. Even those readers, however, may be confused by Morales’ occasionally confusing and scattered prose. The text contains a plethora of grammatical errors, including misused words, incorrect punctuation, and tenses that switch from one sentence to the next, e.g.: “The party continued, the music is loud and elegant the people talking and dancing,” and “After both of them entered the third city gate they finally enter the palace section of the renowned capital.” … These issues are rampant throughout and distract from the main narrative.

Even so, hardcore fantasy fans will find elements to appreciate in Morales’ unrefined prose; the author offers a noble effort clearly rooted in a deep love of epic narrative and imagination. Newcomers to the genre, however, may want to start with a more cohesive fantasy classic.