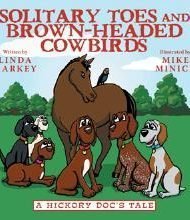 Hunting dogs deal with a new arrival at the Lazy Dog Hacienda in the picture book Solitary Toes and Brown-Headed Cowbirds: A Hickory Doc’s Tale.

The story’s narrator is hunting dog Hickory Doc—called Doc. As the story begins, he and his dog friend Zeke witness a cowbird taking over a dove’s nest. When a trailer pulls up and a huge animal with “solitary toes” emerges, the dogs are mystified. They introduce themselves and learn that the creature (whose “toes” are really hooves) is B.J., a retired racehorse bought by the dogs’ owner to help hunt birds.

After a rivalry develops, Zeke challenges the horse to a race, but soon chickens out. Deacon, a three-legged dog, steps in instead. The race starts prematurely when the dove evicts the cowbird, who falls on the horse, spooking her. After other mishaps, Deacon emerges victorious.

Harkey’s characters are memorable: Zeke, prideful and lazy; Doc, the wise leader; Deacon, who eats book bindings as a “shortcut to reading”; and B.J., the sometimes-arrogant ex-champion. The book charmingly refers to the dogs’ owner as “the Great One” or “our hunter” and his wife as “the Other One (the mother of all mothers).”

But although the story is generally well written, its overall message is hard to discern, and punctuation errors sometimes make the meaning unclear; for example, at one point, the author writes: “Zeke, understood eating, and seemed to accept my explanation.”

Other missteps accumulate. For instance, the word “pedigree” is used twice in the first two pages, without explanation, but when it reappears later, it’s accompanied by a parenthetical definition. The illustrations are adequate but often mismatched with the text. In one example, a picture on a right-hand page shows a dove falling onto Zeke’s head, while the event isn’t described until the last lines of the following page.

This story may offer enough whimsy for some young readers, but a closer edit and a clearer message would widen its appeal.