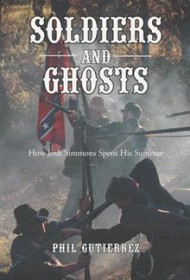 America’s Civil War has long fascinated authors. Since some of the best writings about the war are from such esteemed authors as Mark Twain, Ambrose Bierce and Stephen Crane, it is a challenge for contemporary authors to find a fresh approach. Author Phil Gutierrez’s novel, unfortunately, fails this challenge.

Gutierrez’s story follows young Josh Simmons during his summer with the Army of Virginia. Josh is one of many young Southern males who has endured major battles and the privations of an army on the march. Yet, he is “young, healthy and whipcord tough.”

Various characters enter and exit the plot as various battles rage, but only two assume any individual identity. One, Isaiah Williams, is determined to become wealthy by selling opium balls to wounded Federal officers. The other, Felipe, is a young Cuban to whom Gutierrez assigns a dialect that sounds half Spanish and half German.

Gutierrez frequently interrupts Josh’s story with lengthy digressions about equipment, General Lee, other outfits and campaigns. He also intrudes his own 21st century voice in passages about 19th century views and equipment. The use of such sound effects as “Crash! Bang! Crack, Pow!” or a sentence that is nothing more than “RRRRRIIIIIIIIIPPPRR…,“ etc., gives the book a graphic novel characteristic and is inconsistent with a literary novel.

Readers will also find that the author’s errors in punctuation and sentence structure are an immediate barrier to a full understanding of his narrative.

Gutierrez, a Vietnam veteran, obviously understands war, and he reveals a solid knowledge of the Civil War through this novel. However, good fiction requires strong characters, conflict and plot movement toward resolution. This book is little more than a collection of adjective-laden battle scenes designed to shock. It does ultimately carry Josh to an uncertain future at the end, but due to the writing flaws mentioned, it is unlikely that most readers will persist this far.