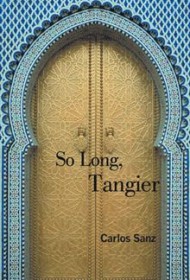 In this fine, tightly written novel, Henry Haskins, an Englishman born, bred and living in Tangier “alone in his old age,” is fading even as the European Imperialism that placed him there fades with him. The narrative is interspersed with scenes stretching to the dawn of the First World War as experienced by the ex-pat community in Morocco.

The story opens to Henry’s present confusion as he is taken from his house, first to a police station and then to a hospital where he is held under guard, all for reasons he is unable to fathom. Nor is he able to fathom what has happened to his city. Flashbacks reveal a man at first able to move easily between cultures because “[h]e felt that he did not belong to either group, or to any society….” He loves across ethnic and religious divides and develops a warm relationship with a village headman on the outskirts of the city.

But gradually, those around him begin choosing sides until, in 1953, “Tangier lost its innocence.” Rioting against Europeans erupts across the city, and Henry’s neighbors begin to flee. “They seem all gone,” he observes in bafflement a decade later.

His final decline is dominated by absences: that of his wife Cornelia, about whose fate he has no clue, and that of his father’s silver-headed cane, stolen by Moroccan children as he aimlessly wanders from the hospital. The last seems a metaphor for the theft of European power and influence by the native population while Henry and his creeping senility poignantly represent the collapsing old order’s inability to understand even remotely the emergence of the new.

What results from all this is a stylish, flavorful taste of a unique city coping with unique stresses. More impressively, the novel offers a nuanced exploration of the ending of a way of life and how it leaves those who have lived it lost and terribly, terribly alone. Author Carlos Sanz has delivered a powerful story that transcends time and place and will speak to a wide and appreciative audience.