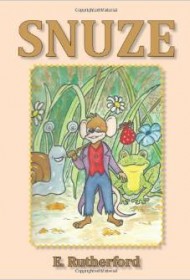 Snuze is an adventure story that follows a young house mouse as he leaves behind the dangers of a human pantry in favor of the wide world beyond the kitchen door.

Snuze emerges from a day’s sleep to find his family and friends dead. He quickly realizes that the colorful “snacks” put out by the “Umanbeans” were actually poison pellets. Brokenhearted, Snuze slips under the kitchen door in search of a safer place to live.

His adventures teach him that cats love stories more than eating mice; that the garden mice run a robust chiefdom; and that discovering a new food source can make you a local hero. Snuze’s heroism is solidified when several baby house mice are discovered under some floorboards; he leads a rescue mission, ending the story on a hopeful note.

Snuze is packed with adventure and unlikely friendships, but the mass poisoning at the beginning casts an unfortunate shadow — one likely to be disturbing for a young audience — over much of the story. Characters are introduced briefly and then forgotten; these stories-within-stories could work in a collection of short stories or in a series of compact picture books, but feel tangential here. Poor punctuation and abundant run-on sentences make the narrative difficult to follow.

Though the characters are sympathetic, the world-building admirable and the premise reminiscent of Ralph S. Mouse and other beloved books with anthropomorphic rodents, dark themes and verbosity hamper the appeal of Snuze. The unfocused narrative and lack of editing further impede a reader’s ability to appreciate of the story, making this a difficult book for children and adults to share and enjoy.