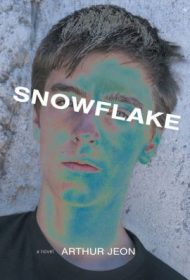 Taking the form of 18-year-old Benji Wallace’s journal, Snowflake begins as a wildfire forces Benji and his family to evacuate their California home. Although they’re quickly able to return, this upheaval heightens the anguish Benji already feels over climate change.

A thoughtful vegan with a prodigious memory, he records his days at school and relationships with his well-meaning parents, feisty kid sister and beloved dog. But teenage awkwardness quickly gives way to suffocating despair as Benji contemplates the state of the world and the antics of the current president (clearly meant to be Donald Trump, although Benji refers to him as “Cretin”).

Unable to stand by any longer, Benji decides to assassinate Cretin. His plan hits both practical setbacks and the intrusion of his own conscience, fueled by conversations with his parents and his sensitive STEM teacher, but he perseveres. As Benji’s mental state deteriorates from lack of sleep and the ever-increasing urgency he feels, the novel careens toward a devastating conclusion.

Snowflake’s controversial topic and relatively downbeat ending will likely be deal breakers for some. Jeon’s treatment, however, is nuanced and far from sensational. Benji’s raging emotions are so unnervingly palpable that readers will feel they’re riding the same internal rollercoaster, and while Cretin is undoubtedly the book’s major villain, Jeon compels readers to question other forces in Benji’s life. Are the adult characters perhaps too understanding and trusting for Benji’s good? What roles do information overload and technology play in his decisions? Is Benji really as superior as he feels to his Instagram-obsessed classmates, or is he choosing an equally simplistic solution to his problems? These are great conversation-starters for older teens, either among themselves or with the adults in their lives.

Though not for everyone, Snowflake will be immensely rewarding for those willing to tackle its tough subject matter, young adult and adult readers alike.