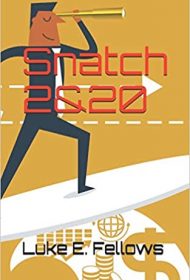 In this satire set in the world of Wall Street, a financial analyst finds himself in over his head after claiming expertise he doesn’t possess.

But when he is offered a job at POS Capital because he’s been writing about the tech stock Zyxview, Giles soon learns he’s out of his depth and is forced to seek out the knowledge he needs to keep his job. That means meeting with Zyxview owner Egon Crump, an eccentric billionaire who claims to have “solved many of the most important issues facing the world in the next hundred years.” Crump is dangerous, powerful, and a self-described genius. The ensuing chain of events lead to Giles nearly losing his life.

This comical – and sometimes grim – tale reveals the dealings of power-hungry billionaires, con artists and the flunkies who do their bidding. The story unfolds in a narrative heavy on sarcasm and dialogue laced with repartee.

The fast-moving plot is informed by the author’s obvious knowledge of finance, which creates a realistic tale. However, the financial jargon may leave some in the dark, although the context is generally clear enough to be understood. At times the witty conversation and narrator’s commentary can grow a bit tiresome, but it also sets the story’s cynical tone and quick pace.

Fans of satire should find the story largely appealing and will enjoy seeing the many parallels to real-life, headline-grabbing characters in these pages.