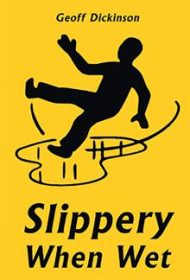 Geoff Dickinson’s novel, a sequel to his Jinxie’s Wish, follows the madcap adventures of a ne’er-do-well in Hong Kong.

Mike Tyler has made an ignominious exit from the U.K. and hopes to make a fresh start in Hong Kong as a magazine publisher. But Mike’s conniving nature gets the better of him. Hoping for an easy route to wealth, he begins romancing Mira Tan, one of his editors and the heiress to an electronics fortune.

Meanwhile, Mike’s nemesis from London, security expert Jack Beecham, has also arrived in Hong Kong. He’s there to do business with Joe Tan, Mira’s father, who fears for his family’s safety in the wake of intellectual property thefts and kidnapping threats. As Mike’s and Jack’s paths keep crossing, each discovers the other is not as bad as he thought. At the novel’s climax, the two former enemies team up to protect the Tans.

Readers’ enjoyment of Slippery When Wet will depend largely on their tolerance for lowbrow humor. The novel features a great many slapstick pratfalls, most of them sexual or scatological in nature. Mike’s randy attempt to flirt with a dinner companion, which results in his genitals being mauled by a dog, is a salient example.

That said, many of these scenes are truly funny in addition to being outrageous. An extended scene in which Mike and Jack bond over digestive distress—and an unfortunate tourist keeps encountering them—is particularly well played.

The novel is not without flaws, however. Dickinson tells the story from many points of view. He often switches among them in a single chapter, sometimes with only a new paragraph to indicate the change. This can be distracting and confusing. In some instances, it also compromises the novel’s potential for suspense by revealing the identities of Joe’s enemies fairly early.

Overall, a more polished narrative structure would improve the novel, but Slippery When Wet has much to amuse the right audience.