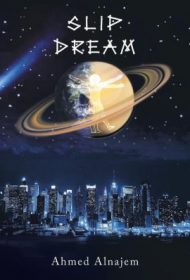 This science fiction novel presents an unlikely hero pressed into service to save the world from an alien invasion. Narrated through a rambling first-person account, the book reads like general fiction until the story abruptly turns into an aliens-among-us adventure for the second half.

Derek Jackson (DJ) works occasional gigs as a disc jockey around Los Angeles, races cars illegally on the street, owns a workshop to build and fix race cars, and deals drugs. When his childhood nemesis frames him for a crime, DJ is falsely convicted and sentenced. While incarcerated, he’s visited by Ruby, an attractive street racer, who reveals her true identity as an FBI agent fighting against Slip Dream, a lethal alien drug.

Due to DJ’s experience selling drugs, he becomes part of the team and has “nanobots” added to his veins to increase fighting power. Although resistant at first because of his non-violent nature, DJ trains as an assassin after his brother nearly dies from Slip Dream.

This is an interesting conceit, but the story is burdened with slow pacing, sketchy world-building, and undeveloped characters. Serious writing mistakes make the book an immensely challenging read. There are no chapters, merely “paragraphs” consisting of long, run-on sentences filled with grammar, spelling, punctuation, spacing, capitalization, and usage errors. Tenses shift, dialogue is incorrectly formatted, and DJ as first-person narrator knows information only a third-person omniscient narrator would know.

Numerous writing errors impede fluency, for example: “-Amber-I told her you were rocking he crowed,” and “-Me-Amber and I are in the Greek resonant across the street for the hospital.” Misspelled and misused words appear repeatedly, including “passed” for “past,” “collage” for “college,” “role” for “roll,” “tows” for “toes,” “tiers” for “tires,” and much more.

Unfortunately, the promising premise (which might have worked better as a short story) is lost because of the writing errors and readers will find this a terribly frustrating experience.