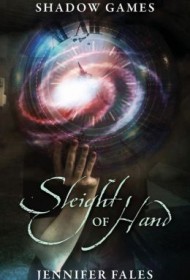 The story is set in a far future society where humankind has, through unsanctioned genetic manipulation, created human/animal hybrids known as Supernaturals—beings that possess superior intelligence as well as the respective physical and instinctive attributes of the animal their DNA has been spliced with.

Living in a series of domed structures known as the Necropoleis, the relative peace between Supernatural factions is becoming increasingly strained and war is looming. Lilith and Laydon are adult twins struggling to come to grips with their mysterious origins and strange abilities. Laydon’s power is dark, while Lilith is filled with goodness and light; she may, in fact, be the key to finally uniting the Supernaturals.

The storyline is competently written and undeniably character driven, but there are two major concerns that readers should be aware of. Foremost is the issue of continuity: Those who haven’t read Shadows and Fire will be hopelessly lost. There is little to no effort made in getting readers up to speed with what transpired in the first novel or even with the general backstory, which in this case is extensive and essential to understanding what’s going on.

Another issue is the story’s muddled sense of identity. A blend of science fiction and fantasy elements is fine (and, in fact, quite popular right now) but the reference on the back cover to parallel realities —which isn’t present in the book — and the novel’s classification as “FICTION/Action & Adventure” muddies the waters and is likely to confuse more than a few potential readers.

That said: Fales has created some fascinating characters here. The central figures of Lilith and Laydon are a strong point, as are some of the supporting cast. And the diverse worlds of the domes have much potential for future exploration.