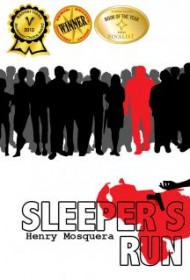 It is readily apparent when authors are enjoying their own fiction, and such is the case from the first page of Henry Mosquera’s tale, Sleeper’s Run. The story shines with the polish of research into locales, weapons, cultures and sundry esoteric forms of killing. When an author works this degree of referential filigree into his story, it’s easy for readers to become engrossed in the proceedings.

The tale begins when an ex-soldier with Post Traumatic Stress Disorder lands a dream job in Venezuela. Eric Caine’s life had been sliding downhill since his return from Iraq. Now in Caracas working hard in a meaningful way and having found a wonderful woman, there seems nowhere for Caine’s life to go but off the rails. Indeed, after a staggering, unexpected event, Caine finds himself on the run, hunted as an assassin, with few viable options for survival.

Overall, the story is a mash-up of several thriller genre tropes. There is the brainwashing angle of The Manchurian Candidate and the constant peripatetic escapes from danger of Robert Ludlum’s Bourne books. The hero is a virtual James Bond of driving, flying, martial arts and weapons skills. There’s nothing wrong with any of this, as the author shows his craftsmanship in keeping his story gamely apace and enthralling.

Small complaints include sudden switches in perspective from first person to third and back again, which draws attention to the writing in a distracting way, and the discombobulating turnaround for readers when the main character in an instant goes from normal citizen to international fugitive.

Nonetheless, fans of international skullduggery and relentless action will enjoy this thrill ride. Mosquera clearly has more places to go in his fiction, and readers of Sleeper’s Run will look forward to tagging along.