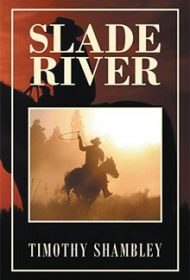 In this western tale, Texas Rangers Tom Slade and Mike Rivers assist the army in undercover operations and roam the countryside, seeking justice for the innocent. The slim book is divided into five sections, each one a stand-alone adventure featuring Slade and Rivers.

Part one introduces the protagonists. In this story, Rivers, a former sheriff and bounty hunter, seeks revenge for the death of his wife and son at the hands of the lawless Clayton brothers. When he tracks down the culprits to the town of Pine Ridge, Rivers finds that Texas Ranger Slade is also on the hunt for the brothers for escaping jail. Slade persuades Rivers not to commit murder, but to let him do his job so that Rivers doesn’t also end up on the wrong side of the law. The two join forces, becoming partners and fast friends. The sections that follow offer the duo’s further adventures.

Author Timothy Shambley maintains the familiar tone of an old TV western, an approach that will appeal to many. Unfortunately, the stories fail to fully engage. His descriptions are as flat as the prairie, with details you’d find in any generic western story: “…Tablerock was like any of the other towns that he had been to – a bank, a dry goods store, the sheriff’s office the hotel, a saloon, and five or six houses.” The dialogue is similarly derivative: “Yeah, I remember Mike. Right fine fellow. Ain’t in trouble, is he?”

Meanwhile, the adventures lack the nuance and layered character development that would give them depth. Peopled with stock characters and situations, the plots are unsurprising: The good guys prevail, and even when one of them is shot, clubbed, and left for dead, he rises to chase the bad guys again.

To the author’s credit, Mike Rivers and Tom Slade are likeable characters. Their adventures require more vivid and fresh detail, however, before this book can reach its full potential.