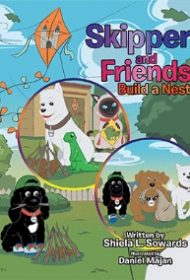 A varied group of animals pool their efforts to help a family of robins in the picture book Skipper and Friends Build a Nest by Shiela L. Sowards.

Skipper, a black dog who wears tennis shoes and a baseball cap, is preparing for a day of kite-flying with his friends. When he goes to get his kite from the shed, however, he sees that a nest was blown from a nearby tree and three baby robins are stuck on the ground without shelter.

Skipper enlists his friends—Yorky, a dog; Leone, a lizard; and Chin, a cat—to help build a new nest. Needing grass clippings to make a bed for the birds, the animals seek help from the neighborhood bully, a bulldog named Cedric, who, despite his past misdeeds, is eager to help. The story ends with the robins safely in their nest and a new, friendly relationship between Cedric and the other animals as they finally head out to fly kites.

This is a sweet, gentle tale told in a style appropriate for young children, though it sometimes drifts toward verbosity with repetitive, unnecessary language, as in this early passage when Skipper finds the young birds: “Just then, at that moment, he spied yet another baby bird lying to the right of the first baby bird that he had seen.”  These distractions slow the narrative, as do the times when there’s not enough description. For instance, it’s four pages after Leone is introduced that an illustration makes his species clear.

The artwork is adequate, if somewhat uninspired: An image of a flying robin is repeated, and the birds don’t particularly resemble real-life robins. But the dual themes of assisting people (or animals) in need and bringing folks together to help others create the book’s momentum. As a whole, Skipper and Friends Build a Nest constructs a second solid, pleasant entry to Sowards’ Skipper book series.