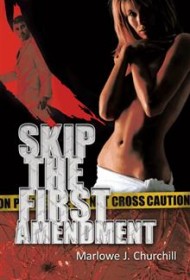 Marlowe J. Churchill’s noir crime novel, Skip the First Amendment, opens with Skip Easley, a jaded crime reporter at a newspaper in Seattle, working on a story about a murdered topless dancer. But he soon gets himself fired, and the novel then follows Easley to a newspaper in Riverside, California, a dusty, small, college town east of Los Angeles.

Luckily, the Seattle story Easley was covering follows him south when he reports on a series of murders for his new paper and realizes they’re connected to the dead dancer. He ultimately crosses some ethical lines by becoming too close to his sources.

The book covers familiar ground for crime novel fans but with some new twists, such as employing a hard-boiled journalist instead of a private investigator, and bikers instead of Mafia soldiers. Churchill is a retired journalist who worked in Seattle and now lives in Riverside, and his experience shows in his insights about reporters and their relationships to both sources and editors.

The story isn’t much of a whodunit. The plotlines include such characters as the topless dancer that Easley falls for even though she’s a source, the various bad guys, and the police and federal investigators working on the case. Churchill mostly takes the time to bring the story’s various threads together to a satisfying conclusion. His writing is crisp and clean (although he could use a good copy editor), and towards the end, the narrative’s pace picks up to the point where the reader can’t put down the book.

Churchill’s one jarring affectation is that he writes in first-person when Easley is in the story, but switches to third-person everywhere else. Readers will get used to the gimmick and the book is still a fun read, but the story may have been better served by a straight third-person treatment.

Highly recommended for readers of noir crime novels by Dashiell Hammett, Raymond Chandler and many others.