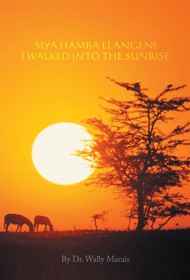 South Africa’s Eastern Cape is the location of this tenderly written novel, set in the 1700s. It’s a time when people of various cultures mistrust and sometimes disrespect one another, and where people with a strong religious background must grapple with the ways of witch doctors and healers and threats from marauding tribal gangs.

The book opens with 23-year-old saddle maker Hans Marais, known as HM, returning to Africa from his studies in Holland. He has brought along some beautiful horses he owns, but the military police accuse him of stealing them because they want the horses for breeding. HM cleverly escapes and heads to his family’s farm, accompanied by his bushman friend Henry.

While the story line follows HM and his extended family and friends (who continually meet, fall in love and marry in a flash), the underlying message reflects the importance of respecting all people’s lives. “We have to find a way to change people’s attitudes towards each other, and teach them to show dignity and respect for all men,” HM tells Henry. Through HM’s many encounters with others, he demonstrates peaceful solutions to people’s differences.

Dr. Wally Marais’ book is based on his personal experiences growing up on an Eastern Cape farm and reads somewhat like Aesop’s tales for human beings’ behavior. Though the plot is light on drama and intensity, the author employs nicely descriptive word play regarding the wild animals, including hyenas, leopards, springbok, rhino, and more. “All around me were grey vervet monkeys lying open armed with their white tummies facing the sun soaking in its warmth like sponges. Added to this were the chittering, fluttering and shivering birds clutching to each other as they too tried to absorb all the sun that they could.”

Overall, this capably written story, with a bit of South African history and a strong religious message emphasizing respect for all people, offers a feel-good read for its audience.