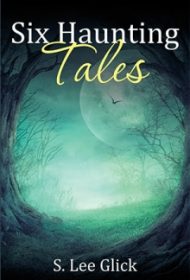 The title of S. Lee Glick’s slim offering, Six Haunting Tales, aptly explains the book’s content. There are, indeed, six tales that, as the author writes on the back cover, are taken from Glick’s “chilling imagination.”

In the first story, “Introduction to Mary Worth,” four boys camping in the woods bring back the ghost of a drowned woman who wants them to replace the children she lost in a flood. The second story is a cautionary tale about two women who drink too much and end up on a luxury liner on a course headed to abuse and sex trafficking. The third is a retelling of “The Three Bears” with dragons and a happy ending.

The book also includes “Planet of the baby making morons,” a post-apocalyptic yarn about government cover-ups and a plan to colonize Mars. Another story (which has no title and just slips into the middle of a page) is about a practical joke gone bad.

These tales were written in a notebook during the author’s rehabilitation from a stroke. In fact, the fifth story, “Service Dog To.,” is pseudo-autobiographical in nature and should help readers empathize with stroke victims.

Many of these stories have potential, but the prose is riddled with errors in punctuation, spelling, capitalization, tense and redundancy. Dialogue is told without quotation marks, periods appear in the middle of sentences, and run-on sentences are common, such as: “We will make enough money from this trip to bonus, good job; congratulations to everybody There will be bonuses for everybody!” Such issues make these stories extremely hard to read.

According to the back cover, this is Glick’s first book. Should another volume follow with more original material like “Service Dog To.,” Glick might be successful—provided he employs the aid of a good copy editor.