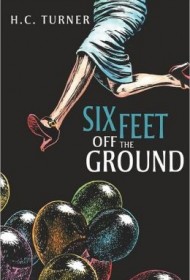 Bedlam and dysfunction reign supreme in H.C. Turner’s darkly comic novel Six Feet off the Ground, as a haze of drunkenness surrounds the three downtrodden protagonists in this tale of lost love, violence and mental survival.

The book begins with Ed Dorris, an aging rock star who suffers from alcohol- and drug-induced delirium, on a cross-country expedition to escape a prison sentence, a gang known as the Bandidos and, most of all, his inner demons. Meanwhile, his one-time wife, Marcie, is attempting to raise their son Will, though her constant drunkenness, fits of violence and cavalcade of male partners severely affect her parenting abilities. Will, the only character who isn’t drunk or battling his own mind, is just trying to maintain some semblance of a normal childhood while clinging to his dog, Dirty, and trying in vain to keep his mom from drinking. The book culminates in an apex of violence for the characters, resulting in very different outcomes for them all.

Although Turner’s characters benefit from his professional background – he has been involved in the music industry since 1997 and has probably experienced firsthand the effect that touring and substance abuse can have on musicians and their families – his prose is often convoluted with unnecessary adjectives and adverbs: “Small white folds of ash wafted weightlessly with no apparent destination into the cold winter horizon on blurry gaseous vapor and created noxious, gray-black smoke.” And there are some discrepancies in character: Marcie “got an enormous boob job” from one of her boyfriends, a plastic surgeon, but is described six pages later as “flat-chested.” (There is a cursory mention of a breast reduction following the augmentation, but “flat-chested” comes as a surprise.)

Despite the book’s flaws, Turner manages to weave intricate stories through the past and present lives of his characters. Seemingly inconsequential plotlines conclude in the happiest ending a dark comedy like this could possibly have, creating a largely compelling read.