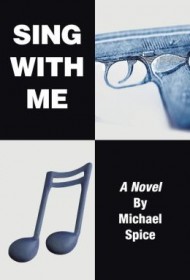 Set in Washington, D.C., Sing With Me focuses on a naive, young white teacher at a recreation center’s after-school program.

Carlisle Jacobson endures a culture shock with his new job. Having lived a luxurious life, Carl makes awkward attempts to blend into black culture. (At one point, the author writes that the rec center’s chain-smoking black janitor, Des, “had to work at not laughing” at Carl’s efforts to be friendly.)

When one of his inner-city students is caught in the crossfire between gangs, Carl visits the boy in the hospital, where he meets Lucia Sanspeur, a beautiful, enigmatic black woman. Carl is attracted to Lucia, but his interest meets with initial resistance. “You know there are plenty of good looking, eligible black guys around,” she tells him. “You know, white guys don’t have a corner on that market, Mr. Jacobson.” Even so, Lucia opens her heart to Carl, who must overcome his underlying ideas about blacks informed by his bigoted mother.

The book’s plot of a privileged teacher needing an education is well worn, and Carl’s ignorance is too profound to be believable; he’s a disheveled fool with no concept of life outside his social circle. While driving down a street crowded with drug dealers, he notices a man: “He held a small pouch, like the one Carl used to hold his marbles when he was young. Was it marbles this man wanted to trade for his MG? And if this were some sort of yard sale, shouldn’t they place their wares on tables in front of their homes…?”

In addition to an unrealistic central character, the novel presumes readers are unfamiliar with D.C. demographics, which are exhaustingly described. Overly long explanations and extraneous material plague Sing With Me, which weighs in at 813 pages. An editor could delete hundreds of pages of unnecessary verbiage and find numerous typographical errors.

In sum, problems large and small sink this hefty novel.