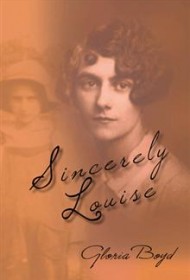 Sincerely Louise is a touching book in which author Gloria Boyd tells the story of her mother Louise, mixing fact and fiction. “Parts of her story are from her own words,” Boyd writes on the book’s back cover, “parts from the early pictures, the rest, from my imagination. You may call the book a memoir, a fictional biography, or a tall tale.”

Louise’s life began in 1909. By age 7, Louise and her younger sister were being raised by their maternal grandparents on a farm in rural Connecticut. Abandoned by the girls’ father, their mother lived nearby, keeping and losing low-level jobs while searching for a new husband.

During infrequent visits to her children, the mother would promise to retrieve them as soon as she could, though she never did. Louise regularly sent her brief letters that often begged for a response; these were signed, “Sincerely, Louise.” Her mother never wrote back, but in the meantime had two more daughters by different men. Boyd’s story follows this turbulent relationship between mother and daughter through Louise’s young adulthood, when she becomes a wife and mother herself.

The book is a quick, often amusing read, especially when Louise’s scrappy, mischievous little sister (Boyd’s Aunt Ruth) acts up, rejecting Louise’s valiant attempts to provide her with motherly guidance. Although her sister eventually goes astray, Louise finds stability in her own life, as well as the ability to forgive her mother for her failings.

Boyd doesn’t reveal why she decided to fictionalize her mother’s life, writing in notes on the cover only that her mother kept an album of family photos, which she wistfully viewed with Boyd but never elaborated on fully. But her attempt at filling in those blanks is colorful and assured, creating a fully formed, sympathetic character in Louise. Only frequent typographical errors, such as whole paragraphs repeated and mistakes in punctuation, mar this enjoyable work.