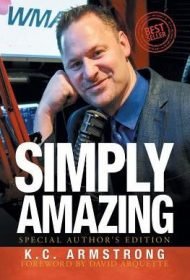 In Simply Amazing, K. C. Armstrong, CEO of WMAP Radio, offers stories of 12 people who have overcome obstacles to contribute to society. The book is comprised of edited interview transcripts from Armstrong’s radio show, The World’s Most Amazing People, about “people who can encourage us to rise above pain and misfortune.”

Armstrong, once a cast member of the Howard Stern Show, prefaces his book with an account of his own downward slide into alcoholism and homelessness. His health was ruined. He had been hospitalized 53 times, and his pancreas was mostly calcified. When he finally turned his life around, Armstrong wanted to do something to leave the world a “place better than [he] found it.” This, he says, was the raison d’être for his book.

Among the profiles here are the stories of entrepreneurs, cancer survivors, an Auschwitz survivor, the mother of an autistic child, and the author’s mother, who nearly died climbing Kilimanjaro. Some went on to write books or establish organizations to help others experiencing the difficulties they overcame. For instance, Jeanne Beard, who struggled to raise an autistic son, established the National Autism Academy. Jenny Maher, whose attempted suicide left her a quadriplegic, published two books: Never Give Up and Finding Faith in Darkness.

Readers will be inspired and encouraged by the underlying messages of persistence against adversity and the importance of taking a strong moral stance. “When it comes to another person’s safety or well-being,” states Werner Reich, Holocaust survivor, “jump up. Be the first to help.”

A few issues create minor distractions: In his introductions, Armstrong sometimes overhypes the interviews, noting, for example, that his mother “died at Uhuru Peak” on Kilimanjaro when her account indicates only that she was near death. In addition, Armstrong’s judgment in including the founder of a company Armstrong is associated with (Kulabrands) is questionable.

Nonetheless, Simply Amazing introduces readers to an array of interesting people whose authentic voices are worthy of an audience.