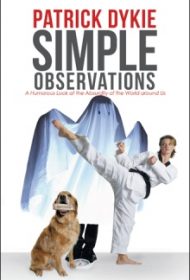 Some see the world with optimism— cup half full—and others see it less hopefully, cup half empty. But Simple Observations reminds us that there’s yet another category:  Those who see the cup filled to the brim with absurdity. Count Patrick Dykie among the latter.

Dykie’s world is full of everyday situations that tease his funny bone: babies wearing headphones, fad diets, malls that are shorthand for Men-Alone-Lost-Lord-Save-Us, the scourges of humanity (otherwise known as mosquitoes), wedding receptions from hell and the ubiquitous presence of Walmart.  Such people and places inspire his tongue-in-cheek remarks.

Dykie begins many of his observations with a question. “What’s with all the rice and beans?” he asks regarding Mexican restaurants. And: “Is it just me, or does exercise really suck?” Some of his thoughts may elicit the occasional ah-ha moment; for example, musing about his neighbors, he notes: “How come the nudist couple next door is always middle-aged and over-weight, with their best years behind them?” Others seem to stretch for a laugh and may offend. In a follow-up to the beans comment, he notes that the busiest place in a Mexican restaurant is the bathroom. “I gave new meaning to the word ‘runs’ as I sprinted to the back of the restaurant…” he writes of a night out.

For all his see-the-humor-in-all-life’s moments, one might sense a bit of sadness and disappointment in his observations – as if so much of popular culture is really the detritus of a declining civilization. There’s also a feeling that present day United States has strayed too far from the demographic makeup of his youth. “You may wonder if you are even in America anymore” he says when noting that the atmosphere at Walmart is like “debate day at the United Nations.”

Dykie invites us to laugh at the absurdity of it all. But in a quiet moment, some readers will wonder if he really feels it’s all such a laughing matter.