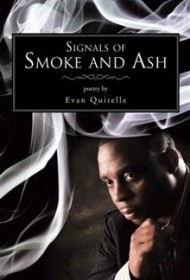 At their best, the poems in Evan Quitelle’s Signals of Smoke and Ash are smart, assured and engaging, displaying a wonderfully dexterous and adroit use of language in the service of deeply felt emotions.

Readers are put on notice to be on their toes from the first poem, which reads in its entirety, “Ardor is the sconce / an angel provoking light / now I have vision.” Compact and intricate, the arc, or, better, the spark of metaphor in the poem races through the lines like an electrical current.

Much of the poetry that follows is indeed concerned with the various “angels,” or, more traditionally, muses, who set in motion the love and adoration Quitelle seeks to express for the women in his life. He is often tender and rueful, as in “I miss you breaking the fall / when I reached out and / I held on to holding you” and ”There is / a woman /that has / never seen / the rain / no matter / how she / dances she / is unable / to stir / the waves.”

Mostly, though, the poems are a celebration of love. In “Black Lavender,” Quitelle writes, “I travel at the speed of dark / and you are the light / that keeps up with me… I am midnight / intoxicated by / your moon shine.” The surprises of the language, reversals of clichÃ© and dance of images in lines such as these are the hallmark of a true poet.

There are poems here that fail to engage the reader, mostly through a reliance on a too-easy, Hallmark-greeting-card kind of sentimentality. Here and there, Quitelle seems to lose the thread of his narrative logic and the poem can seem muddled and vague.

Overall, though, this is a fine book full of a lovely, intricate wordplay that is a joy to read.