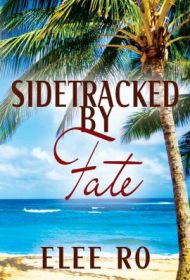 When Larissa’s boat sinks, she and her small raft are shipwrecked on what appears to be a deserted island. But she soon meets mysterious Nico, who lives on the other half of the island in seclusion—wealthy and sustainable seclusion, but seclusion nonetheless. Nico rescues her by taking her in, as she is running low on food and water.

As the passion heats up between the two of them, Larissa senses Nico is keeping secrets from her, including one involving a locked room, and she begins to wonder if there’s more to his story than just getting away from it all. And does he have more designs on her than ravishing her body?

RO’s novel delivers sexy characters with palpable chemistry. Their intimate moments are described in detail, but tastefully, and the premise keeps readers turning the pages, wondering if Nico is a good or bad guy and if things will work out between the two protagonists.

However, the story also suffers several flaws. Punctuation mistakes, especially commas, and the occasional switching of verb tenses, sometimes within the same sentence, prove distracting. RO also could have used an editor to remove sentence fragments and awkward sentences, such as: “He has shown her nothing but kindness and generosity and his actions [sic] always polite and honorable. He kept his word and [sic] never inappropriate with her.”

Abrupt transitions for major plot points can feel jarring (one sentence Larissa’s awash at sea, then she’s on land with nary a description of how she got there). Finally, the ending is drawn out and somewhat hard to believe.

Despite such shortfalls, the novel generally moves quickly, and RO shows impressive skill at crafting tantalizing sex scenes and intriguing characters. Fans of romantic thrillers who can overlook the mechanical errors should find this a wild ride.