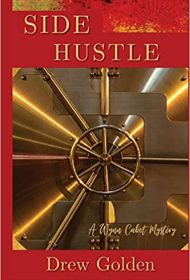 The theft of an expensive sculpture draws FBI agent Wynn Cabot to a new case—but this is only one of her concerns once fraud, murder and corruption surface in the investigation.

Cabot is relatively new to the FBI as part of its Art Crimes Program. Her immediate supervisor, André Bishop, is out of commission due to an investigation gone wrong in Jerusalem. (While seemingly unrelated to the plot, the author eventually circles back to this.) Cabot works best talking things out, so she finds Bishop’s absence disconcerting. Nonetheless, her dyslexia serves her well, enabling her to piece together clues others might overlook or dismiss.

The massive gold and silver sculpture, well-known as the symbol of a Washington, D.C. bank, has been removed for repairs by what proves to be a phony art restoration company; neither the company nor the sculpture are anywhere to be found. Shortly afterwards, the contents of several of the bank’s safe deposit boxes are stolen. Following interviews with bank employees, Cabot suspects the incidents are an inside job.

Meanwhile, a former employee now working for the U.S. Treasury Department’s financial crimes division, is part of an investigation into money laundering involving the bank’s owner, president and a congressman on the board of directors. As the story unfolds, several dead bodies and political machinations add to the intrigue.

Although some of the characters are one-dimensional, including the self-serving bank president and corrupt congressman, others are well-nuanced, especially Cabot. She’s a former Olympic swimmer unafraid of hard work or challenges. Yet, she’s vulnerable at times – most notably when it comes to Bishop. While the two have little interaction, a deeper relationship is intimated.

The author has crafted an intelligent, sensitive character in Cabot, and mystery lovers will enjoy the fast pace, enhanced by realistic dialogue. The extended web of entangled criminals keeps the suspense high.

As the author fits all the pieces together with finesse, readers are sure to enjoy the ride.