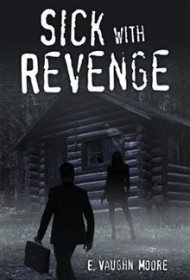 Freelance writer E. Vaughn Moore offers up a circuitous thriller in this twisty drama that runs parallel to the O.J. Simpson murder trial from the early 1990s.

The novel opens on a violent scene in a Philadelphia prison where attorney Sean Swoboda, along with his client Sage Wirspa and corrupt prison superintendent Manny Cofield, confronts Anthony Campbell, a violent pedophile who kidnapped and raped Sage’s daughter Jadia. As an explosion rocks the prison, Sage pulls out a concealed Glock handgun and shoots Campbell in the head.

Escaping from the scene, Sean and Sage seek refuge with Greysen Artino, an old law school pal and former Secret Service agent. But as they are leaving Greysen’s house, an explosion blows it apart, killing his woman. Simultaneously, we meet Sean’s manipulative, jealous wife, who wants her husband to accept an offer from Los Angeles prosecutor Marcia Clark to join the prosecution team in the O.J. Simpson murder trial.

It’s here where the narrative falls apart, becoming increasingly incredulous and disjointed. Greysen and Sage begin having an affair, but their relationship turns brittle when Sage learns that Greysen had a relationship with her mother, now dead. After a short jump in time, we suddenly learn that Sean is a candidate for the U.S. presidency, although almost nothing is revealed about his bid. Ultimately, we learn that neither Sean nor his wife are what they seem to be on the surface.

This twist is meant to offer a dramatic reversal in the style favored by writers like Scott Turow or Jeffery Deaver, but the novel’s poor exposition telegraphs its arrival and largely spoils any surprises to be had from the discovery. In a story about heroes and villains, no one turns out to be very likeable or interesting in the end. Along with soap operatic character arcs and jarring plot turns, this story is likely to turn off all but the most enthusiastic readers of legal thrillers.