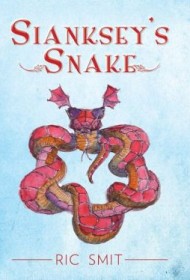 With Sianksey’s Snake, Ric Smit presents a nautical tale with overtones of the paranormal.  The book relates the adventures of two sea-faring men who are transported to a parallel world known as the “Dimension of Wind, Wood and Water.” This dimension epitomizes the “crest of the sailing ship era.”

Morgan, the first of the men to be transported, sails a converted Norwegian lifeboat named the “Sea Shell.” When he gives a ride to Shelly, a chance acquaintance, he learns that Shelly seems to have a connection to a ghost that haunts the boat, and both Morgan and Shelly feel that they knew each other in former lives. While on route to a coastal town, they are enveloped in a dense fog.  When they emerge, they discover they’re in the alternate world.

Kal, a disabled veteran, is the second to enter the alternate dimension. Just before the transition, he meets a woman named Serah, who is from the alternate plane. After saving Serah from some hooligans, Kal manages to follow her back to her home dimension.

The rest of the novel concerns the exploits of the men, their relationships with these women, and their assimilation into the otherworld culture as the mystery of the Sea Shell ghost is explored.

The novel’s best passages occur when the author describes aspects of sailing. It’s clear that Smit has expertise in all things maritime, and the vivid immediacy of these sailing passages keeps readers turning pages.

Less successful is the author’s attempt at character development. While the protagonists have different backgrounds, their voices are similar, and there’s nothing uniquely compelling about either character. The author also eschews the use of paragraphs, sometimes offering 14 pages or more of text before starting a new paragraph. This makes the narrative exceedingly challenging to read.

With revision, Sianksey’s Snake could appeal to those who love a good sea-faring yarn. As it stands, however, the book is unlikely to satisfy a wide audience.