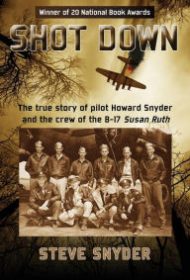 This highly engaging book tells the story of the author’s father, Lt. Howard Snyder, and the crew of the B-17 Susan Ruth, of the 8th Air Force’s 306th Bomb Group, shot down over Belgium on February 8, 1944. Two airmen died in the stricken aircraft, the rest bailed out of a flaming inferno careening to earth. Most of them became POW’s; three were murdered by the SS. Some successfully evaded capture and were hidden for months by courageous Belgian underground members, and one fought with the French Resistance Maquis.

Extensively researched, packed with photographs, and neatly interwoven with background remarks, this meticulously detailed description of the airmen’s daily life offers a comprehensive, yet personalized portrait of a war in which “more airmen with the Eighth Air Force lost their lives than in the entire Marine Corps.” The use of excerpts from letters and journals gives a compelling, up-close account of what it was like to fly with death every day — for example, this description of the raw emotions of men in a burning B-17:

“I must have been knocked unconscious for a period of time. It was difficult to see through the smoke and flames, but I could see the terrified face of Eike, his eyes almost out of his head, looking crazily about him as he tore frantically at his flak suit and safety belt.”

Snyder gives readers a real sense of what it meant to be in the blitz in London, on an airfield in East Anglia, and in German-occupied Belgium and France. Despite the wealth of detail, he manages to keep readers turning pages.

As the devastation of WWII fades into history, this informative and insightful account of one bomber crew’s experiences serves as a cogent reminder of what individuals suffered during seven years of blackouts, deprivation, and the constant threat of death as the hobnailed Nazi boot seemed poised to stomp out civilization. It’s a thoroughly satisfying and worthwhile read.

BlueInk Heads Up: Highly recommended for historians and WWII aviation buffs, who will appreciate the author’s wide-ranging, highly detailed research and extensive website and sources listings.