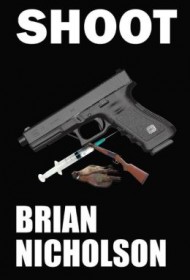 Retired British Army colonel Brian Nicholson draws on his experiences working with the UK’s Secret Intelligence Service (known to fans of James Bond as MI6) for Shoot, the ninth entry in the author’s long-running action series. Despite the book’s brevity, Nicholson squeezes in plenty of intrigue, fleeting action sequences, and a considerable body count.

As the novel begins, the heads of government of eight Middle East nations are gathering before the G20 Conference for a hunt at a remote estate in southern England. During the conference, a government “minder” is found murdered by his own shotgun. To replace their lost man, the fictional “British Intelligence Directorate” (BID) calls in agent John Gunn to investigate.

In Agatha Christie fashion, guests continue meeting bad ends while Gunn uses his unique skill set to counter the work of an assassin. After working the case like a police procedural, he ferrets out the fact that two nuclear warheads have been secreted out of Pakistan and are potentially headed to the Taliban in Afghanistan, while a mole within BID is sabotaging intelligence efforts.

The novel’s second half plays out more like a traditional action thriller, as Gunn and his attractive companion Emma Pankhurst rush to track down the warheads, a kidnapped U.S. ambassador, and a substantial cache of heroin that’s part of the deal. The novel delivers all the required roles for men’s adventure novels: the steely-eyed hero with a trigger finger, a sexually insatiable female lead, and villains who chomp down on cyanide pills before they can spill their secrets.

Although there are some interesting set pieces, the characters are mostly flat and the prose suffers from rigid dialogue and occasional grammatical errors. The novel is bogged down by exposition in its first half before rocketing to an explosive but rushed denouement in the desert.

It all amounts to an uneven reading experience that should, nonetheless, appeal to the male thriller fans it seems to be targeting.