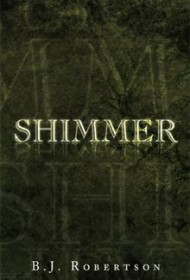 The “Shimmer” around which all the action in this fantasy is focused works as a force field to keep certain people in their respective places. Areel, a specially chosen young woman of Rondace, uses her keen intellect, athletic skills, and photographic memory to explore the Shimmer and what lies beyond the barrier.

Areel is a 24-year-old Learner (one of the few villagers chosen for their high intellect) and tree walker (someone who holds the ability to walk on the wind above the trees). She sets out alone on her lengthy survey, as is customary for her people. When she unexpectedly finds a way to cross the Shimmer and explore another village, she begins a chain reaction that affects other villages similar to her own, plus an advanced group of scientists whose intentions are unclear.

Using all her combined powers with her genuine kindness and good nature, Areel works to unite all people, educate the masses, and eliminate existing barriers so they can live in freedom. Naturally, she cannot accomplish this alone and enlists the aid of her newfound friends, Jezreel, Jen, and Conia. Although her supernatural abilities help her attain this feat, it’s really her innate goodness that makes it all possible.

In this brief book (appropriate for young adults and adult fantasy lovers), the author presents an intriguing story, although with limited character development. Areel and others appear without flaws, making them seem like one-dimensional contrivances, rather than actual flesh-and-blood people. The book could also benefit from editing to fix inconsistencies in style (Shimmer, shimmer), spelling errors on nearly every page (“barley” instead of “barely”; “surly” instead of “surely”; “wondering” instead of “wandering”; “ware” instead of “wear” etc.), and an unexplained shift from third-person omniscient to first person and then back again.

The ending of the book opens the door to another novel, which may appeal to readers who want to continue on Areel’s adventures exploring the world beyond the Shimmer.