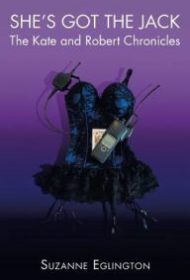 In this fourth installment of The Kate and Robert Chronicles, the amorous couple is still in their first year of marriage. The story begins with a funeral following the deaths in a terrible accident of Kate’s sister Stacey and her husband Kevin. Their wills reveal a strange bit of information concerning Kevin, heightening the protective and somewhat controlling nature of Robert, who, as a policeman and SWAT team member, is naturally on guard.

When Kate’s bizarre but well-trained, stealthy and deadly Uncle Jack (he seems to have special ops, spy, or martial arts training, but his background is unspecified) makes an appearance, Robert seizes the opportunity to train with Jack and become an even stronger protector of Kate while advancing his law enforcement career.

Jack has many secrets to reveal to his niece, and Kate is at the center of an interesting supernatural twist. Robert’s training continues, culminating in a dramatic event that makes use of his new skills, as well as Kate’s mysterious abilities.

Kate and Robert’s romance and evolving relationship are the story’s driving forces. Whether they are home or traveling, their explosive sexual chemistry is varied and explicit. They also seem to reach a point of balance, where Kate is more accepting of Robert’s protective ways and he’s more trusting and respectful. Uncle Jack’s quirky but dangerous personality is strangely endearing.

Unfortunately, despite the new character and Kate and Robert’s well-wrought sex life, the book struggles as Robert’s training sessions with Jack become repetitive. Additionally, there’s little action until the story’s climax, a denouement that comes a bit too late.

Despite these drawbacks, fans of the series will enjoy the familiar faces, the surprise addition of a supernatural element and the author’s unique and titillating sex scenes.