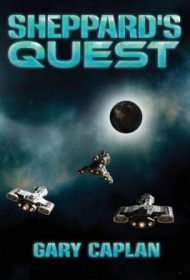 This space opera stew, which combines elements of Star Trek, Battlestar Galactica and Star Wars, is a sequel to Gary Caplan’s other novels in the series.

Robert Sheppard, Star Knight and Alliance of Worlds star fleet commodore, is tasked with finding out who—or what—is stealing animals and other specimens from the Talcon race’s Starcity and other Alliance worlds. To complicate matters, the Talcon and the Ceyloom are on the verge of war, and “an entity capable of devouring a world has found a way into this universe.”

The author delivers some remarkably imaginative concepts: the Nahalion, for example, a planet-sized being with tentacles that feed off energy; and the Keeper, who speaks “not with vibrations to mimic sound, but within Sheppard’s head.”

Unfortunately, many will struggle with wordy passages that “tell” rather than “show” and overwritten technical detail: for example: “The areas were probed [by drones] in three vectors in order to make a more complete sensor scan of the potential small energy fluctuation readings that might occur if an alien probe used some form of cloaking device or a time-sequenced distortion…”) Often it’s necessary to re-read paragraphs to comprehend what is happening. Info dumps abound, such as an entire page devoted to introducing eight characters of the Alliance Space Fleet. The same thing occurs with the introduction of the alien races.

Those new to Caplan’s story are likely to feel overwhelmed by the many foreign elements here. Readers who appreciate intricate, technical descriptions and the complexity of the author’s world, however, should enjoy the story.