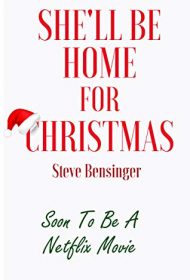 She’ll Be Home for Christmas is a short novel about a divorced mother, Louise, and her teenage son, Chris, as they face their first Christmas since the death of Chris’ older sister Helen.

Louise is an attractive woman in her 50s with a successful catering business. Chris is a high school senior, star basketball player and talented musician, but his sister’s death in a car accident and a difficult relationship with his father has led to an under-age drinking problem.

When Chris is involved in a motorbike accident and sent before a judge, Louise hires an investigator to prove that the accident was not his fault. She also arranges for her ex-husband, his new partner and her teenage daughter to stay with them for the Christmas holidays to distract them all from the Helen’s loss.

The book cover declares that the story will soon be a Netflix movie (the author explains at the book’s end that it was conceived as a Hallmark-type story), and it’s quickly apparent that this story originated as a screenplay. The author includes scant description, and transitions between scenes are marked by headings: “Party,” “ER room,” and “Cop Shop,” for example.

The dialogue, however, is convincing—particularly between Chris and his father—and the plot is generally fast moving and engaging. Characters develop and overcome challenges, and there are romantic storylines for both Chris and his mother Louise.

As a TV-like story, the book is successful. As a novel, however, the narrative is superficial. Chris’s difficulties are easily resolved, and Louise’s part in the storyline reads more like an afterthought. Names are confused several times (i.e. Chris’s love interest Regina is called Emily at one point and the text mixes up two characters, Herb and Nick, at another), and there are numerous typographical errors that prove distracting.

Despite such issues, the story is recommended for fans of the Hallmark Channel, or anyone looking for a light, quick read.