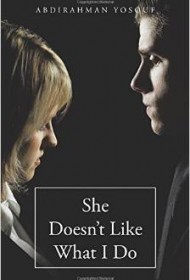 With his debut novel, She Doesn’t Like What I Do, Abdirahman Yosouf delivers a romance set in the world of high-stakes business.

The book begins with a mysterious woman rescuing Andrew, a wealthy entrepreneur, from a rollover car accident. She delivers the semi-conscious Andrew to the hospital and leaves. Andrew spends the next six months trying to find her, and, when he does, engages in a series of maneuvers to try to win her love. He throws a party for her community, builds a hospital for her brother to manage, and pays for her grandfather’s eye surgery. These attempts all backfire, however, and Andrew’s passion for Aubrey, the object of his desire, seems forever star-crossed.

During his pursuit of Aubrey, Andrew seriously neglects his business. He loses the support of his backers and fails to win important contracts. Near the end of the book, the author depicts Andrew as a ruined man: depressive, suicidal and still pining for Aubrey.

The book climaxes with Aubrey on the brink of marrying an old flame and Andrew distraught. Will Andrew survive? Will Aubrey come to her senses, ditch the old flame, and marry Andrew? These are the questions that move readers quickly to the conclusion.

While Yosouf’s novel has some potential as a romance, the book is severely flawed by grammatical errors. Run-on sentences, mismatched subjects and verbs, and punctuation mistakes abound on every page. (An example of the muddled prose: “The forum was going to begin to and Andrew’s guys came but the media gathered to them.”) In addition, Yosouf fails to develop most of the characters in his novel; they function merely as faint foils for the protagonist’s action.

Yosouf is from Somalia, and it’s clear that English is his second language. As an attempt to write in a foreign language, the book speaks to his courage and persistence. Nevertheless, this novel would need substantial editing before it would be accessible to most readers.