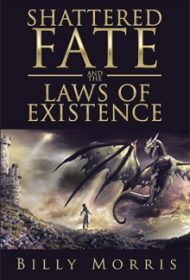 Billy Morris establishes an intricate foundation for Shattered Fate and the Laws of Existence, his tale of a witch pursued by warlords.

Before he delves into the action, Morris offers a detailed view of a world forged by a monumental collision between the planets Eden and Metro. The result wasn’t an explosion; instead, the collision created a new world bound by magical forces, where warlords, witches, and dragons ultimately rise.

Though this story’s main action occurs 1,000 years after the fusion of the worlds, it’s fundamental to Morris’ narration, as it sets the ground rules for the action. The collision created a static world, where light never reaches half the planet, known as the Dark Lands. Those on the other half have access to magic powers but are under constant threats.

This is the setting for the story of Angelina, a young witch who runs afoul of the warmonger Lord Haden and his forces. She also becomes the target of magician guilds and a host of other threats. She must flee the small kingdom of Utopia, even as she’s forced to take part in a struggle that could determine the future of a hybrid world held together by ever-weakening magical forces.

Morris has a knack for the detail and complexity that mark the best works of fantasy. His writing is straightforward and thorough, the dialogue is nicely varied, and he shines in the action sequences. For some, however, Morris’ in-depth backstory might prove overwhelming. There’s much to learn in terms of setup and background before the action starts, and the prose becomes long-winded and a bit dry, like textbook language. Casual readers faced with discussions on the genesis of dragons, for example, might lose interest.

Even so, Morris is dedicated to his imagined world, and even through its denser stretches, his attention to detail makes his text come to life.