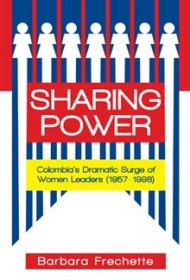 These seven profiles of Colombian women leaders would not be terribly out of place in a women’s magazine, 85 footnotes notwithstanding. American Barbara Frechette took advantage of her position as wife of the then-U.S. ambassador to Colombia to conduct interviews in the mid-’90s, and she demonstrates how rural patriarchal restrictions loosened for some, making room for talent and leadership to prevail – even if it wore a skirt.

Her subjects are disparate: an activist, anthropologist, fiber artist, economist, politician (via business), journalist, and trade and development expert. Frechette visits certain themes with each, including a Colombian culture that designates the man as head of household, the role of family in a woman’s advancement, and the qualities these women rode to success, such as an ability to brush off chauvinistic slurs.

Frechette paints warm, multi-dimensional pictures of the women, mining personal nuggets from them. For example, anthropologist Virginia Gutiérrez de Pineda relates how she and her anthropologist-husband had four small children when they told their family – contrary to all social norms – that they were through having children. Her mother soon drew the family to her bedside. “She turned to me and said, ‘I am going to die because you don’t want any more babies.’”

The author notes that she started her research in an attempt to explain Colombian women’s “rapid empowerment,” but unfortunately the stories lack enough context to persuade us that empowerment has occurred for Colombian women in general, not just a few. This book serves up discrete snapshots of successful women rather than analysis. In addition, the material is dated, having been previously published in Colombia in 1999; updates in 2010 tacked onto each profile only underscore that fact.

To her credit, the author did her homework, citing numerous secondary sources. But copious quotations can make for difficult reading. Still, while lacking broad appeal, this book may provide useful reading for a college class in feminism or Latin American studies.