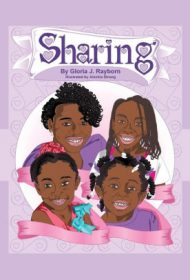 In this rhyming story, Victoria and Mya love playing, dancing, and singing together—but can’t stand sharing their things. While they like the same clothes, each girl refuses to let the other wear her things, resulting in almost identical wardrobes. They can’t share dolls, stuffed animals, or any other toys.

The book’s positive message will help young children begin cultivating a sense of empathy. In addition, all four girls in the story are African-American and are depicted as relatable role models, helping to fill a gap in available picture books. The story’s diction is approachable for young readers and the plot engaging. However, while the writing can be rhythmic, it’s uneven in places, with varied syntax and end words that don’t always rhyme.

Despite its strengths, the book would benefit from showing scenes after the moms propose a solution to the problem. As is, the girls are told that sharing is positive, but readers don’t get to see them expand their circle of friends or have more fun than they might alone. The book also doesn’t address why the girls don’t like to share. Giving voice to their worries and then directly dispelling them might help youngsters address their own reasons for coveting things.

Sharing would benefit from addressing the causes of selfishness and the benefits of sharing more explicitly. Nonetheless, it’s an enjoyable story with characters that many will appreciate.