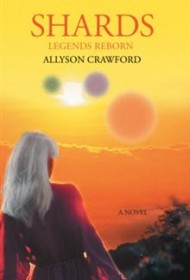 Allyson Crawford has narrative skill beyond her years. Crawford was still in high school when she penned Shards: Legends Reborn, a fantasy novel that offers rich characterization and vivid detail.

Shards tells the story of Zari, a young girl laboring in harsh conditions on the alien planet Finya. Along with her best friend and “childhood sweetheart” Jaden, Zari works in the keep of Guyana, a cruel taskmaster who forces children to labor in mines.

It’s only with the arrival of a mysterious member of a furry race of “cat people” known as the Felidae that Zari begins to learn of her true origins and purpose as a visionary and an inter-dimensional traveler. Faithfully following the most familiar and beloved tropes of the fantasy genre, Crawford weaves a tale of an unlikely hero on a quest to recover her roots and, in the process, wage an epic battle for the forces of good. In Zari’s case, that means taking a central role in a fight against epic forces of evil bent on wholesale destruction, enemies that include an imprisoned malevolent god and his most destructive minions.

As Zari assumes a central role in this fight, Crawford weaves a tale rich with detail and imagination, creating a complex world with its own particular history and mythology. Crawford’s flair for imaginative detail is the book’s greatest asset, even as it occasionally becomes its biggest downfall.

The story’s mythology is often complex and confusing. Crawford includes early references to an involved and ancient war between races. This conflict plays a role in Zari’s subsequent journey, but between constant references to the different races, historical characters and mystical elements of this ancient feud, the novel’s pace tends to slow, then stagger. Such narrative density could prove overwhelming for a casual fiction fan.

Still, such detail is nothing new to the fantasy genre and will likely be forgiven. Overall, fans of the style will be entertained by this promising debut.