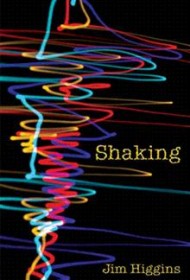 Shaking, a story written in novel-like form, is the first of a trilogy that appears to be based on the Jim Higgins’ family history. It opens by telling readers that his grandmother, Annie, was born into a family of Irish descent with 15 children. The book quickly moves to Annie’s marriage to merchant seaman Johnny and the birth of Annie’s children, including Cathie, the author’s mother. Cathie marries a sailor named Jimmy, gets pregnant and has a difficult labor. Because forceps were used in his birth, James (Jim) is born with infantile paralysis. The author then relates the many ups and downs of his family’s life, including his father’s odd disappearances and his own difficulties with speech and uncontrollable shaking.

Higgins writes about his family life using the third person. Unfortunately, the narrative is flawed by numerous mistakes, such as the repetition of entire paragraphs as well as word misspellings–“mussels” for “muscles” and “cycick” for “psychic,” for instance.

The author does occasionally nicely employ Irish idioms, for example, taking “a quick swally” for a drink. His writing also has a pleasant visual quality at times, such as when he describes the excitement of friends coming by to eagerly watch Jim’s newfangled television: “Every night it was always the same, people arriving before transmission began, and some would stay until the wee white dot had vanished from the screen.”

While Shaking lacks the artistic flair, sharply defined dialogue and universal appeal of polished autobiographical works such as Frank McCourt’s Angela’s Ashes, Higgins offers insight into the difficulties faced by a child with cerebral palsy in a family already struggling with housing problems and a father’s serious alcohol issues. Because of the book’s lack of drama, however, its readership likely would be limited to those who have shared similar difficulties growing up and are seeking other perspectives.