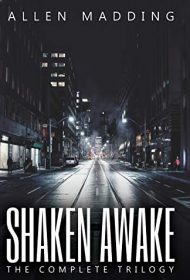 Shaken Awake: The Complete Trilogy is a novel with a mission: to educate and inspire readers to care for the homeless. The three stories in one package follow one another chronologically; each would not be complete without the others.

When Pastor Sam Matthews hears that a homeless man froze to death on the church steps, he’s compelled to help the homeless. During a freak Atlanta snowstorm, his church takes in strangers who can’t make it home, and from there, Sam dives headfirst into finding workable solutions for this community.

As the story unwinds, readers see a true-life community for the homeless in Austin, Texas— Community First! Village—through the eyes of several characters. The community offers tiny homes, trailers, and tents rather than shelters for its residents and allows them to perform paid tasks. The story’s homeless characters find food and medical care through volunteer programs, and a support network is encouraged. Matthews copies the idea with a similar community in Atlanta.

While clearly well-intentioned, the book falls short in several ways. The story presents the communities as utopias solving all the ills of homelessness. For example, there’s no mention of crime, and no children live in the communities. The characters are one-dimensional, seemingly mere props allowing the author to expound on various homeless issues.

Additionally, the prose is wordy and overly detailed. In one passage, a character retrieved the ice scraper, “wiped off the windshield, side windows, and rear windows as well as brushing snow off the cowl area and hood”; then readers learn every detail as the defroster clears the windshield. At another point, readers endure two full pages of minutiae about a man on a plane, from the flight attendant’s speech about seat belts to the wing flaps changing position. Even the character in the story rolls his eyes in boredom.

With revision, this book could possibly deliver a valuable message about homelessness. As is, readers will lose interest wading through unnecessary, wearisome detail.