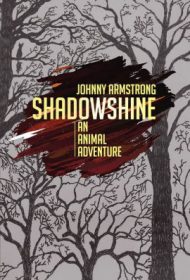 In this compelling imagined life of “forest-folk,” the wildlife kingdom strives to save themselves from those who would destroy it.

As the story begins, Zak, a possum and poet, strolls with Sena, “a handsome, well-groomed, and rather stately bobcat,” to the site of a wedding he’s officiating. Gathered there are a host of creatures: “cats, otters, red wolves, foxes, nuthatches, thrushes” and more, as well as a herd of mastodons. It’s on the head of one of these enormous animals that Zak conducts the wedding.

But the good times soon end as a “Canopy Connection”—when squirrels gather information and broadcast it among the treetops—is convened to discuss concerns about the “sans-pelages.” This new, small group of animals walk upright, hunt and gather food and, although not identified as such, act much like humans. One sans-pelage named Mungo is particularly evil, and is setting fires in the already drought-plagued forest.

Zak volunteers to strike out in search of other critters who may have a solution to the problem. Soon, he’s lost but meets a host of new friends, including Sark a mastodon, and Durzey, a caribou with a strong accent, who help him along.

This is an imaginative tale with a fully realized animal kingdom of colorful characters. The writing is original and often poetic, such as this description of “the large white tern who floated gracefully, like a ghostly marionette.” The environmental message is serious, but the story is often light and loving as the animals with their very human traits attempt to deal with the sans-pelages, while also trying to intuit the meaning of a “peculiar celestial event.” The event, observed by Stella, a wise upland sandpiper, seems to portend doom, but what, why, when?

While a book narrated entirely by animals can be a tough sell, this tale is as delightful as it is dismaying and will surely resonate with a wide audience, particularly, those with a deep love of this earth.