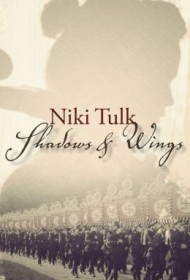 The Australian-born author of this impressive first novel is also an accomplished cellist, and she has deftly applied musical structures (she calls the book a “fugue”) in shaping her prose. Niki Tulk’s chapters unfold with a kind of rhythmic inevitability, and she has a keen ear for dialogue. On the acknowledgments page, she credits her editors, family, friends and Johann Sebastian Bach.

Shortlisted for Australia’s CAL Scribe Fiction Prize, Shadows & Wings addresses time-honored concerns: war, guilt, the mysteries of love and the dark secrets that families keep. Tulk’s energetic, curious Aussie heroine, Lara Davies, is 22 when her beloved immigrant grandfather dies. A box containing the dead man’s keepsakes comes Lara’s way, and because of that she is compelled to make a wrenching voyage of discovery, for among her devoted “Opa’s” trinkets are a tiny porcelain horse, a miniature cowbell and . . . an enameled Nazi SS lapel pin.

“Sometimes, the past is a shell curled against the ear, its muttered storms calling across a thin, white corridor,” Tulk writes. Into that haunted corridor we go, to Germany in the 1930s, where the man Lara always knew as Thomas Miller is one Tomas Müller, a young cellist who insists he is “made for music, not guns.” But Hitler’s bloody tide sweeps him away, too. When, in 1995, Lara revisits the scenes (and survivors) of Muller’s early life, she uncovers the truth—and must confront a demon of inherited guilt in herself.

The tale is not entirely fictional. Tulk tells us in her online bio that it originated in a disturbing childhood conversation. Later, she says, “I had to unpack the silences in my own family.” She’s done a brave and admirable job of that in this vivid, heartfelt book. Now living with her husband and four children in New Jersey, she’s a writer of great gift and high promise.