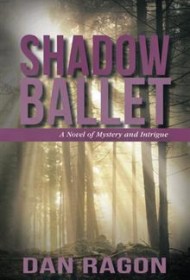 Dan Ragon’s debut, Shadow Ballet: A Novel of Mystery and Intrigue, is a suspenseful cat-and-mouse story that details what happens when a corpse washes up on a Northern California beach and local police struggle to keep up with the unfolding revelations of a secret NSA operation.

Paul McAfee, a 40-year-old widower, arrives at a scenic vacation home, hoping to spend a few months in peace. While there, he strikes up a relationship with his new neighbor, a divorced painter named Jean Parker. The discovery of the body on the beach disrupts their budding relationship, however, as police drag up Paul’s history with his late business partner, Tim Gordon, who may not have died in a plane crash as Paul thought.

The twisty plot will keep readers guessing. It emerges that Tim and Paul’s computer chip business was actually a front for an NSA operation infiltrating a Los Angeles organized crime ring. Shocked to learn his partner is still alive, Paul finds himself thrust back into the world of intrigue he thought he’d left behind; “I feel like I just stepped into a James Bond movie without the benefit of a script,” he says.

The story’s characters are distinctive, and the dialogue is sharp, including sexy back-and-forth between Paul and Jean or joke-filled police repartee. Ragon is skilled at establishing each charcacter’s voice (although there are a few places where the laughs seem in poor taste: aping slave dialect, for example, or recording a stutter or a German Gestapo accent).

With the police always one or two steps behind, there is inevitably a lot of recap, making the book significantly longer than it needs to be. Additionally, homonym slips and missing punctuation could be caught with a careful copyedit.

Despite these issues, Ragon creates an eerily foggy Northern California setting, and his characters are well drawn and full of complex motivations. Shadow Ballet is likely to be particularly enjoyed by Robert Ludlum fans.