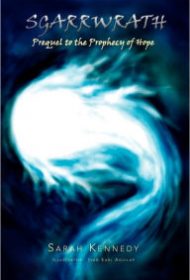 This dark fantasy takes readers to an alternate world where the past and present merge and reality and illusion are often indistinguishable. True to its genre, Sgarrwrath focuses on shadowy magic elements punctuated with images of horror.

The story concerns three brothers with myth-like bodies: horse heads, scales, and wings. They are all guardians of the Source, the mysterious origin of love, life, and Light contained within the Orb of Power.

Meanwhile, a fourth brother, Arawn, has gone astray. Arawn sought the Darkness, a pervasive evil led by cast-out Sgarrwrath (formerly known as Dullahan and currently referred to as “The One Whose Name Is Not Spoken”). The brothers attempt a rescue, but are hampered in their efforts because Arawn suffers from physical, mental, and emotional corruption— with Sgarrwrath controlling his soul.

As Arawn’s brothers guide him back to the Light, he endures frightening and confusing memories, and the Darkness aggressively fights to retain him. Meanwhile, horrific images appear throughout, such as eyes dripping bloody tears, sores consuming bodies, and so on.

The writing in Sgarrwarth eschews the use of contractions, giving it a timeless quality. And with its emphasis on Light and Darkness, the Orb of Power, and the flame within, the book functions on an allegorical level: Is Sanctus (the master of creation) God? Is the flame love? Is Sgarrwrath the devil cast from heaven? Comparisons to Star Wars (Darth Vader, the Dark Side) and the Harry Potter series (Lord Voldemort or “He-Who-Must-Not-Be-Named”) are inevitable.

The word “Darkness” (capitalized and italicized) appears frequently as a one-word sentence, as if to convey much meaning through a single word. Used sporadically, this might have been effective; appearing here sometimes multiple times per page, the technique seems more of a shorthand employed to avoid elaboration. Readers will also find that the story engages more intellectually than emotionally.

Even so, the book offers an imaginative and provocative story, one that should appeal to lovers of the genre.