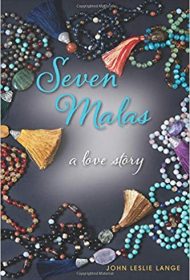 Seven Malas the fictional story of one man’s journey through life, told through the lens of his relationships with six women.

The story begins as James Wilder falls in lust with Willow, a woman he spots in the atrium of his therapist’s office building. A year later, James meets Willow at a yoga retreat and learns she’s engaged. Her upcoming nuptials don’t deter the two from a physical relationship, however. Their relationship ends poorly, but James learns to channel his emotions through writing poetry.

Trying to heal from this relationship, James hooks up with an old friend who teaches him to make malas (strings of prayer beads). James creates a mala for each woman he engages with in the story, with certain beads personifying facets of the women. For example: “Amazonite for her sky eyes/ Sliver for the sound of her laughter/ Carnelian for the first chakra, blood, life vitality…”

In total, we follow James’ relationships with six women, each presumably bringing him closer to an understanding of himself and each becoming a muse for his poetry.

The prose and poetry are lovely in this generally quiet novel. The author creates elegant sentences and poems, such as: “Love is the magic that changes music to rubies,/ Weaves silver through poems and sets fire to dreams.” Individual scenes are engaging, and the beauty of the natural world is strikingly depicted.

While the basic story line works well, however, a surplus of topics hampers its effectiveness. The protagonist’s children come and go throughout but have no apparent connection to the main story. Cancer looms large in the beginning as James battles the illness, but the issue is resolved early and seems to serve no purpose in the overall plot. With so many extraneous elements, the novel’s focus is muddied, and a lack of external conflict fails to propel readers forward.

Overall, this is a sluggish reading experience. Still, some might appreciate the author’s poetry and beautiful prose.