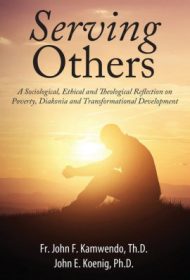 Although Catholic social teaching is supposed to “minister to the poor … to enable [them] to lead a better life,” a billion people are still living in destitution around the world. The authors argue that society isn’t doing as much as it could to help ease privation and meet “the needs of the poor by providing food, water, shelter, clothing, health care, and spiritual nurturance.”

Keeping the spirit in their hearts of Gaudium et spes, a pastoral document that grew out of Vatican II, and drawing on the Catholic Catechism, think tank and economic statistics and the work of a prodigious list of writers, theologians, and researchers, the authors explore such topics as diakonia in the Old and New Testaments, stewardship and solidarity, the limitations of government spending on social welfare programs and the relationship between poverty and education.

Yet to its credit, Serving Others isn’t all reporting and theory. Kamwendo and Koenig recommend ways that governments and individuals can better respond to the poor, most notably by focusing on relief for the “poorest among the poor” and stimulating economic growth. They argue for committed, empathetic engagement over theory: “The solution to the underlying issues of poverty … involves our walking with others as opposed to simply giving them handouts and doing for them.”

While academic works like this are often preachy, dry and elliptical, the authors’ idiomatic prose makes for easy reading and never veers into sententiousness. This engaging, well-researched book, endorsed by leading Catholic prelate Cardinal Joseph Tobin, is a spirited and worthy call “to act with compassion and mercy toward all mankind.”