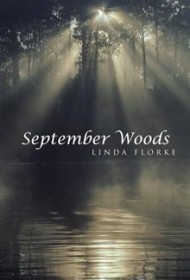 September Woods starts out as a thriller, but turns into a touching and satisfying coming-of-age story as the novel unwinds.

The book begins as convict Randall Daggett learns of the hidden location of a small fortune and knows that he must find a way to break out of prison. That he raped and murdered a young girl is of no consequence; Daggett cares nothing of his debt to society, nor of the casualties he might inflict during his prison escape and subsequent hunt for the money.

Daggett stages his violent escape from prison and heads to the woods to hide while he begins to search for the money. When he comes upon a teenage girl named Stella Compton, he takes her prisoner. This is Stella’s worst nightmare come true, and all she can think of is how she might escape before it’s too late.

Stella’s a good, smart girl. Her character is endearing and readers will sympathize with her immediately. Daggett, on the other hand, is a well-developed atrocity; readers will root for him to come to a bloody end. “He reeked of body odor and stale smoke, and she fought the urge to vomit,” author Linda Florke tells the reader of Daggett. At times, Daggett can come across as a cliché, but Florke does a skilled job of making him abominable. She keeps the suspense high as readers wonder how things will resolve and whether Stella will ever have the chance to recover from her ordeal.

The novel switches gears about one-third of the way through, focusing on Stella’s emotional journey. Though the suspense portion of the novel ceases, readers will continue turning pages due to their attachment to Stella. Florke’s sure-handed writing and well-drawn main character make this novel appealing to fans of thrillers and character-driven stories alike.