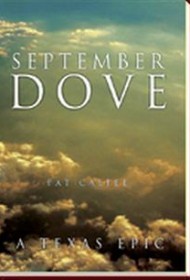 Pat Calfee’s September Dove is a post-WWII family saga and romance seen through the eyes of its protagonist, Farley Marie Sebastian, and set in two vastly different parts of Texas: the south, near the Mexican border and Gulf, and the remote interior of ranch country.

Farley is born to a struggling but loving working class family in southern Texas that is rooted in an uncompromising Nazarene Church. She is also born with a mystery: She has darker skin and hair than her blonde-haired, blue-eyed family. This creates both a bridge and a barrier between the Anglo and Hispanic worlds of her birth.

September Dove is indeed an epic. We are taken through the trials and tribulations of Farley’s childhood to her 39th year. Readers witness her struggles with relationships, social change, class issues, racism, and love (including the difficulty of learning to love herself). Underlying all these trials is Farley’s inner battle between her human desires and her scriptural upbringing.

Throughout the story, Farley matures, learning that life is not a straightforward affair and to ask better questions. Readers especially see this as Farley falls for the tough, handsome rancher, Darr Dietrich. She realizes that his love is worth separating from her family and church and taking on the harsh social and physical realities of Texas ranch country.

Defined by good writing and strong plot and characters, the story’s easy flow is hindered at times by two issues: Calfee occasionally switches points of view between characters too frequently—sometimes in several consecutive paragraphs. Second, some scenes are overlong and repetitive and could benefit from tightening. Many passages in which Farley displays inner conflict could easily be slimmed down.

Overall, though, readers care about Farley as an interesting, compassionate, and charmingly flawed person. Moreover, September Dove ends when Farley is only 39, leaving readers wondering what will happen next. One hopes that Calfee has planned a sequel. Farley has a lot left to do.