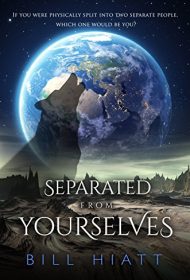 Bill Hiatt wastes no time kicking off the action in his ambitious young adult fantasy novel, Separated From Yourselves.

The sixth book in the author’s “Spell Weaver” series begins with well-established characters and a number of previously thoroughly explored environments. Hiatt jumps right into the world he’s already created, an approach that may initially dissuade readers new to the series. Happily, he offers plenty of resources for newcomers, including a glossary of characters and a summary of all previous installments of the series.

In past stories, the series’ hero Taliesin Weaver has revisited past lives and waged battles against ancient gods and monsters. The other installments have featured alternate realities and a varied cast of faeries, warriors and evil clones.

This book—which weaves together elements of traditional fantasy, Greek mythology, and teen drama—sees Taliesin facing a unique challenge. The series takes place in different planes of realities, environments that feature gods, monsters and mortals, and here, his friends—known as Tal’s Warriors—are waging a battle against malevolent forces that threaten multiple realities. The Warriors find Tal in the guise of his 12-year-old self, with no memories of his recent exploits or adventures. The novel tracks their struggles to restore Tal to his normal self while taking on forces in an epic battle against a primal evil.

Getting a sense of characters, place and time is challenging at the beginning of the novel, and the story is weighed down with the sheer amount of characters, gods and alternate universes. But thanks to the author’s clean writing and strong voice, this complex story generally flows well, even without the context of the first installments.

Overall, Hiatt balances the story’s density with solid action and a skillful sense of storytelling. Fans of complex young adult fantasy will find plenty to keep them occupied in this carefully plotted tale.