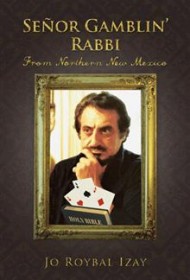 Jo Roybal Izay, a Northern New Mexico native, is a descendant of the first colonizers of the Southwest. She grew up with elderly grandparents who told her tales about her ancestors, including the flight of the Sephardim from Spanish Inquisition. Her depth of knowledge, the fascinating material she has acquired, and her hero – worthy to be considered one of those irrepressible adventurers in 18th century picaresque novels – should have made for a remarkable narrative.

In the mid-1850s, Benjamin Benavidez, a charmer, singer, and aspiring lawyer, realizes that for all his talent he cannot conquer the gringos in a court of law. Known as the “Gamblin’ Rabbi,” he becomes an expert poker player, fleecing and serenading the same gringo lawyers and judges he loses to in court. The novel focuses on what happens to him as he raises a family and as a new generation forms its own idea of success.

With so much going for it, it is regrettable to say that at times the story is awkwardly written. It’s staccato cadence leads to a choppy read, and it is in serious need of copyediting. (“Antonio walk [sic] to the lobby and check [sic] the time [sic] hoping Benjamin would arrive.)

The story of Jews passing as Catholics is of considerable interest in an America where the issue of “passing” is also an important theme in African American literature. But Izay fails to adequately set up the scenes regarding the psychology of passing. Why would a Jew leaving the Canaries “suddenly” become “stricken with uncontrollable fear” in New Spain? Surely this fear is a chronic condition, a nagging worry to a man who has spent his life posing as someone he is not.

Perhaps a second edition could correct such issues, but in its current form it is difficult to recommend this confusingly presented epic novel.